I will be attending Octocon in a week. Octocon is the Irish nationan SF and fantasy convention, and I have been looking forward to go there ever since I decided to go.

Emma Newman is guest of honour, so I am super excited about that! I want to go to as many panels/items with her as possible, I think.

I decided to make my own little schedule for the convention, as the Octocon people post their timetable with a 12 hour clock, which I always find very confusing. I tend to mix what's before noon and what's after. A lot of Norwegians will probably disagree with me about this, but this is how it's like for me. I'm in general horrible with numbers (I'm more of the language type), so I decided to make my own timetable with the proper 24 hour clock. Besides, which proper geeks don't understand the 24 hour clock? ;-P


I have tried not to make my schedule too busy, as I do hope to catch up with some friends and eat too! ;-)

I love poetry, and have for as long as I can remember. I grew up with rhymes and poetry by André Bjerke and Inger Hagerup, who wrote poetry for children. The kind of poetry you can even enjoy as a grown up.

One of my favourite pets is Olav H. Hauge, a fairly well known poet in Norway. He has this poem called "Tåre du tarv ikkje falla" (the Norwegian folk rock band Valkyrian Allstars has made music for it, and it's on Spotify).

Here's my go at a translation:

It was such a little thing for you
but meant so much for me:
A smile when it counted
and a handshake were all.

Tear,
you don't need to fall,
I know you are salty.

I think it is such a beautiful poem, and it's not very hard to understand. How something can seem small for you can mean so much for others.

Moomin and I are rooting for WorldCon in Helsinki in 2017! 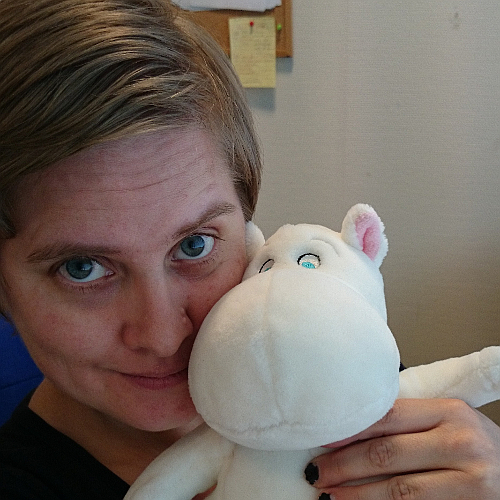 The Girlfriend and I went to Bergen. There were penguins! I love penguins! Read about it HERE.

I read The Lies of Locke Lamora. Loved it, blogged about it HERE.

So, one week off work done. I have two weeks more off in August, when I'm off to London and Dublin. Can't wait.

I seem to be on a roll with my reading. Today I finally am done with The Lies of Locke Lamora by Scott Lynch. Or... Not finally, as I loved it, but I've had it around, wanting to read it, for around six years...

I've also read Urd by Ruth Lillegraven. Fantastic poetry! And this is indeed the sort of poetry you should read from start to end.

I have plenty of books to read and write about, so I guess I should get going with all that.

If you'd like to read about my meeting with my hero, and favourite author of all time, Neil Gaiman, you can read about it in my blog! It includes a reading with Neil Gaiman himself!
Hidden in a Book - book blog

This meme is shamelessly stolen from


1. Do you have the guts to answer these questions and re-post as "The Controversial Survey"?
What's controversial about it?

2. Would you do meth if it was legalized?
No.

3. What's your view on abortion?
Very much pro-choice! A woman should be allowed to decide about her own life, and her own body.

4. Do you think the world would fail with a female president?
This is a bit of an absurd question... I mean - this has already happened! Both Finland and Iceland have had female presidents, and the world is still standing. *shakes head*

5. What do you think about the death penalty?
AGAINST, AGAINST, AGAINST! Who are we to decide when it's "right" to take a life? It's never, ever OK to kill another human being! And what if the person is innocent (it has happened! More than once!)? What are we supposed to do then? No, lock them up instead!

6. Do you think marijuana will be legalized?
Only for medical reasons.

8. Do you believe in God?
The Christian god? No. Nor gods as in... gods. For me, they can be sort of symbols for something. But as creating forces that decides over us? No.

9. Do you think same sex marriage should be legalized?
Now, it is here. But this question is to me a bit odd. It should be "should marriage be legal". When you put "same sex" into it, it's kind of discriminating. Change "same sex" with "interracial" or something similar, and taste it... How does that feel, hmm...?

10. What do you think about illegal immigration?
I think I'll just copy and past

toosdraadloos's reply here, as it's my thoughts exactly:
Difficult question. I would judge every case separately. I'm quite liberal when it comes to this, but when, for example, people have committed serious (war) crimes we have to be strict and kick them out as soon as they get caught.

11. A 12 year old girl has a baby. Should she keep it?
This is a tricky question. I'm tempted to say no, as she's just a child, with the body of a child. But I don't think it's as easy as that. It would depend on a lot of things.

13. Would you support a war in Syria?
No. I'm in general anti war, but from what I've hard of analysis, a war would just make the situation even worse.

14. How do you feel about spanking a child?
Simple: No. Nothing good has ever come from violence. Because that's what it is. I'm very black and white here. Never, ever hit a child.

15. Would you burn the flag of your country for a million dollars?
Sure, it's just a piece of cloth with a cross on it. I have no strong feelings about the flag.

16. Who, or what party, do you think you will vote for your country's next election?
Rødt (The Red Party), where I am a member. They have great environmental politics, as well as great politics when it comes to feminism, workers' rights, culture and so on. I don't know of any other party that is just as good.

17. Are you afraid others will judge you from reading some of your answers?
If they do, well... That's their problem.

So, I have pretty much all in order for EasterCon next year. I just need to buy plane tickets. It will be in Glasgow, and I'm very excited!

I have also finally gotten around to buy my membership as an attending member for EuroCon (i. e. Shamrokon) in Dublin August next year. I think it'll be fun! I have no idea about how to get a room at the hotel and such yet, but I'll figure it out.

...but hopefully not my last!

At the beginning of the EasterCon I felt quite scared. That is, Thursday night, before the con had actually started, I was spending time with

jeremy_m. I was introduced to

tanngrisnir, a really sweet natured Glaswegian, and we ended up going out for curries along with a couple of Americans, one which turned out to be one of the guests of honour (I had no idea, haha). So, Thursday night was fine, though I do feel the nature of my introvert in groups of more than 2-3 people...

I am planning on making a proper account of my first EasterCon over at my blog, with video and all. But yes, first I was scared shitless, but after a while, when I had found a handful of friendly people to chat to, it went better, and I had a blast. I will sign up for the next year's con in Glasgow ASAP, and am even thinking of going to WorldCon in London and EuroCon in Dublin next year. Three cities I love! In one year! It would be fab!

So, I have bought plane tickets for my trip to England at the end of March. I have also payed for my hotel in London (just a couple of nights). I will get a ride with

pogodragon & co up to Bradford, where I'm attending EasterCon. Hotel in Bradford has been booked for ages. I have also bought a ticket for the National Express coach from Bradford to Heathrow when I go home. Need to figure out how to get from the hotel in Bradford to the bus station, but I think it shouldn't be too hard.

I know, I'm quite an organizer. When it comes to travel, I like to have things sorted. I print out tickets, bookings, maps... But then again, I know it makes my travels a lot easier.